A Pennsylvania man has been charged with a crime after publishing an obituary for his living mother in a ploy to get paid bereavement time off from work. Scott Bennett, a 45-year-old factory worker in Brookville, sent the following obit notice for Pat Bennett, his own mother, to The Jeffersonian Democrat. 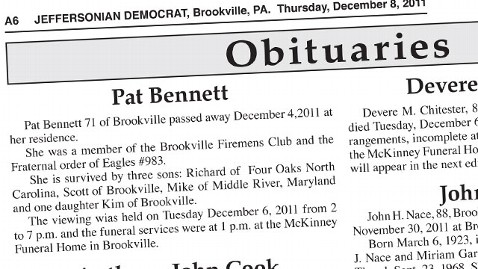 The Jeffersonian Democrat on December 8th, 2011

Bennett was fired from his job and charged with disorderly conduct, Police Chief Ken Dworek said. Relatives called newspaper after the obit appeared to report Bennett’s mother was alive and well and the woman herself then visited the news office. A correction for the woman will be running in Wednesday’s paper.

Variations on the same theme

Encyclopedia of Death and Dying